Drew County was formed in 1846 and named for Thomas S. Drew who served as Governor of Arkansas from November 1844 to 1849. Monticello is the county seat. The landscape of Drew County is rich, flat, delta farmland in the eastern half and rolling hills in the western half. Many of the settlers came from Virginia. The name of Monticello was adopted for the county seat and the first term of court was held in October 1850. Spanish, French, U.S., Confederate and Arkansas flags have flown over the territory in Drew County. A lot of history is preserved in the county. The Historical Museum, a 14-room mansion is maintained by the county historical society. Sixty of its buildings are on the National Register of Historic Places. The economic base for the county is the timber industry, manufacturing of boats, carpets, furniture, and by other service industries. A branch of the University of Arkansas is located in Monticello. Bayou Bartholomew, the longest bayou in the world, runs the length of the eastern side of the county. Hunting and fishing in the area offer several recreational activities. 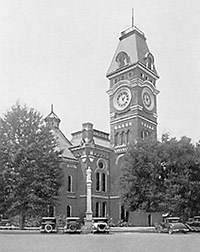 Monticello is the largest town in southeast Arkansas south of Pine Bluff (Jefferson County). Its history is one of continued growth and prosperity. Located at the intersection of two major roads and served early by railroads, it became an enduring commercial hub. A diversified infrastructure consisting of commerce, agriculture, and the timber industry created a strong foundation and sustained the town’s growth. The town also became an important educational and medical center.

The first courthouse was constructed in 1851 on the court square in the center of town. A second building replaced it in 1857. Lots were donated in the early 1850s for building Baptist, Methodist, and Presbyterian churches. Lots were also set aside for a male academy, a female academy, and a cemetery. A library was established in the courthouse in 1857. The earliest newspaper, the Sage of Monticello, began publishing in 1857. Among the pre–Civil War establishments were G. W. Simms & Co. General Merchandise, I. A. Price Dry Goods, M. A. Wilson & Co., Charles Millerd & Alexander Hale Contractors, Henry Lephiew Grocery & Liquor, M. H. Burks & Bro. Hardware, Lephiew & Duval Grocery & Liquor, and Dr. H. F. Bailey Drug Store.  Read More >